7 Technologies Where China Has the U.S. Beat 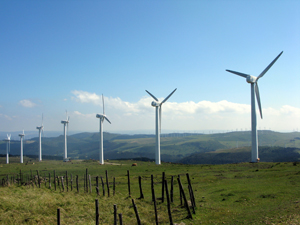 I’ve been watching China’s ascent in cleantech for a couple of years. In that time China’s potential to leapfrog the U.S. has gone from talk to substantive examples of leadership. Even so, I’ve been surprised by the increasing frequency with which China is pushing ahead in new fronts of cleantech development.

Earlier this week, the latest surprise came from energy secretary Steven Chu, who’s been talking up China’s green progress in an effort to boost Washington’s resolve on clean tech policy.

In a talk at the National Press Club, with characteristic forceful clarity (PDF of slides), Chu illuminated the growing list of sectors where China’s emerging leadership threatens U.S. players, and added leadership in supercomputing as the most recent Sino-superlative. China’s success in these technologies represents a “Sputnik Moment” for the United States, Chu said.

“When it comes to innovation, Americans don’t take a back seat to anyone — and we certainly won’t start now,” said Secretary Chu at the event. “From wind power to nuclear reactors to high-speed rail, China and other countries are moving aggressively to capture the lead. Given that challenge, and given the enormous economic opportunities in clean energy, it’s time for America to do what we do best: innovate.”

China’s ascent to the top of the list for supercomputing speed reveals a new front in this race. Last month China’s Tianhe-1A, developed by Chinese defense researchers, became the world’s fastest supercomputer, with a performance level of 2.57 petaflop/s (quadrillions of calculations per second, for all the geeks in our audience, based on a standard test), substantially eclipsing the U.S. DOE’s Cray XT5 “Jaguar” system at Oak Ridge national labs in Tennessee, which runs at 1.75 petaflop/s. Third place is also held by a Chinese computer.

Supercomputers may seem long way from grid-competitive solar panels, long-range electric car batteries, or other cleantech gizmos, but advanced computational simulation is the keystone of most leading-edge scientific research, including nuclear energy, nanotech and materials science, proteomics and other advanced biotech applications. Basically, any very advanced science these days needs big computing horsepower. Leadership on the fastest-computer league tables has been traded off many times, between U.S., Japanese and European computing centers. China is a relative newcomer to the race, but is clearly the new elite.

Chu highlighted several crucial technologies — mostly in the areas of power generation and  transportation — where China is already outpacing U.S. efforts, adding the U.S. must innovate or risk falling far behind. The following is from the DOE:

• High Voltage Transmission. China has deployed the world’s first Ultra High Voltage AC and DC lines — including one capable of delivering 6.4 gigawatts to Shanghai from a hydroelectric plant nearly 1300 miles away in southwestern China. These lines are more efficient and carry much more power over longer distances than those in the United States.

• High-Speed Rail. In the span of six years, China has gone from importing this technology to exporting it, with the world’s fastest train and the world’s largest high-speed rail network, which will become larger than the rest of the world combined by the end of the decade. Some short distance plane routes have already been cancelled, and train travel from Beijing to Shanghai (roughly equivalent to New York to Chicago) has been cut from 11 hours to 4 hours.

• Advanced Coal Technologies. China is rapidly deploying supercritical and ultra-supercritical coal combustion plants, which have fewer emissions and are more efficient than conventional coal plants because they burn coal at much higher temperatures and pressures. Last month, Secretary Chu toured an ultra-supercritical plant in Shanghai which claims to be 45 to 48 percent efficient. The most efficient U.S. plants are about 40 percent efficient. China is also moving quickly to design and deploy technologies for Integrated Gasification Combined Cycle (IGCC) plants as well as Carbon Capture and Storage (CCS).

• Nuclear Power. China has more than 30 nuclear power plants under construction, more than any other country in the world, and is actively researching fourth generation nuclear power technologies.

• Supercomputing. Last month, the Tianhe-1A, developed by China’s National University of Defense Technology, became the world’s fastest supercomputer. While the United States — and the Department of Energy in particular — still has unrivalled expertise in the useful application of high performance computers to advance scientific research and develop technology, America must continue to improve the speed and capacity of our advanced supercomputers.

On a note of consolation, Chu identified two research areas in U.S. labs that have the potential to vault U.S. industries to the front of these fields. Both are both vehicle related:

• Revolutionary Electric Vehicle Batteries — 500 Miles on a Single Charge. With the help of Recovery Act funding, Arizona-based Fluidic Energy is working with Arizona State University to develop a new generation of “metal-air” batteries that can store many times more energy than standard lithium-ion batteries. Metal-air batteries contain high energy metals and literally breathe oxygen from the air, giving them the ability to store extreme amounts of energy.

To date, the development of these batteries has been blocked by the limitations of using unstable water based solutions that break down and evaporate out of the battery as it breathes. Fluidic Energy’s innovative approach involves ionic liquids — extremely stable salts in liquid form — using no water at all.

If successful, the effort could yield batteries that weigh less, cost less, and are capable of carrying a four passenger electric car 500 miles without recharging, at a cost competitive with internal combustion engines. A fact sheet on the project, which is part of DOE’s Advanced Research Projects Agency-Energy (ARPA-E), is available here.

Converting Sunlight Into Usable Fuel. Through a newly established Energy Innovation Hub led by the California Institute of Technology (Caltech), an interdisciplinary team of scientists and engineers are working to create an integrated system modeled after photosynthesis that can convert sunlight, carbon dioxide and water into usable fuels such as gasoline.

The goal is to create a system of artificial photosynthesis that is 10 times more efficient than traditional photosynthesis in converting sunlight into fuel — paving the way for a major expansion of America’s biofuel industry and reducing our dependence on oil.